A terrorist attack occured in one of the most popular and iconic cities of the U.S: our beloved New York, New York. Nevertheless  the news has been slightly resounding, not as much as I personally expected.  In fact, after the attack people still continued to celebrate Halloween, as of tradition, with thousands of masked children who knock on doors for treats .

The terrorist is a handsome  29 years old Uzbek, with a beard which tells us a story of radicalization and even the NYPD confirmed it. Sayfullo Habibullaevic Saipov, who is the proof that Allah is certainly great and God infinitely true but parents are sometimes  assholes; mounted on a van, stroked a school bus and then ran over different people on a bicycle lane creating a massacre of 8 death and 11 injures. He was then  stopped by the police and arrested. 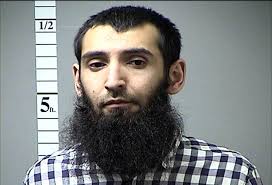 The news of the attack will last another week, however for the families of the victims it will unfortunately last their entire life….

What interested me was the coldness with which the attack was accepted: even though it was a terrorist attack in New York,  the public opinion was not schocked. This definitely exposes one of the characteristics of humanity: We adapt to everything.

I don’t actually know wether the attack can be called a  failure of “safety systems” (even though we know they can’t predict everything, especially in huge cities like New York) or a failure of terrorism.

In fact if terrorism doesn’t terrify anymore, is it still terrorism?

This is why in this terrible attack, I see a tiny hole i where a ray of light shines through.

Respond to New York City terrorist attack: Why is it different from the other attacks?